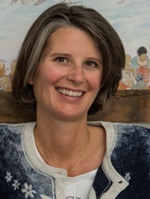 Amelie-Claire von Platen earned her master's degree in studied Arts and Law at the universities of Pisa and Tübingen. Afterwards she was awarded her executive Master of Arts Management at the Zurich University of Applied Sciences. In 2011 she completed her PhD in art history at the University of Tübingen.

Besides her studies, she worked with Sotheby's, for the builders hut of the dome in Pisa, the Bregenz Festival (Bregenzer Festspiele) and for the Institute for Educational Travel (Institut für Bildungsreisen) in Verona. She worked as a freelance journalist for the daily newspaper Südkurier covering southern Germany around Lake Constance. Since 2005 she has been working as cultural manager in St. Moritz, first with Hotel Laudinella, then as head of production and marketing of the Engadine Festival.

In 2011 she founded and launched - together with her husband - the Danuser von Platen Ltd., of which she has been CEO since 2012 specializing in arts and culture.

Amelie-Claire von Platen has published several books on arts and painters from Constance, which is her home city.